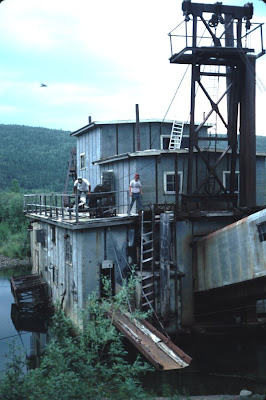 As the Donlin Creek story continues, it is clear this stands out as a modern legend in prospecting sucesses that will rival any in history .

The Northern Miner (2012) recently wrote, "Donlin is one of the largest potential gold developments in the world and NovaGold is moving ahead with the project alongside mega-miner Barrick Gold ...".

NovaGold further stated, "The Donlin Gold project is an uniquely attractive asset which in terms of size, grade, exploration potential and jurisdictional safety, is quite possibly the most important project in the world today". Due to the extensive project, mine opening may be delayed until at least 2015.
Lost in this and several other summaries are the people behind this discovery. In 1988, a small group of geologists were hired by WestGold to search for the mother lode. So Richard Garnett and Mark Bronston of WestGold hired Dr. Paul Graff and W. Dan Hausel from Wyoming to assist in the search for significant gold deposits in Alaska. After a short time, the team found a gold deposit, sampled it, mapped it and drilled the deposit which had every appearance of being a major gold deposit. with a strike length of at least 5 miles! Years later, drilling continued to show that the initial gold discovery was enormous - every bit as large at the Homestake deposit! The discovery is what dreams are made of and one would hope would lead to book and TV contracts in the future.

We will watch this project with interest. I've been told that the project has potential for more than 40 million ounces of gold! That would make it larger than the Homestake, which intrigued the world for more than 100 years!
Posted by PlanetNews at 9:42 AM